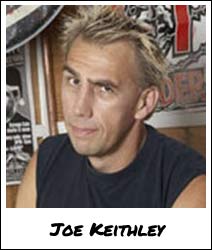 What do you get when Joey Shithead Keithley comes to your town? In short, a whole lot. Joey is best known as leader of Canada’s most influential punk band D.O.A. and as the Canadian godfather of punk. Legendary punk pioneers D.O.A. have barnstormed the world for the last 25 years with their unique combo of activism, humour and ear splitting rock. Joey has a lot of other talents. Firstoff, Arsenal Pulp Press of Vancouver is publishing Joey’s 1st book “I Shithead, a life in punk.” It will be in book stores across Canada October 15th and in the U. S. A. April 2004. In “I Shithead ”Joey regales you with his account of spreading counterculture around the world, while fronting D.O.A. It is a volcanic and entertaining read, as you get all the goods on their activism and the rough road they travelled. Joey is also a spoken word artist; his style is somewhat akin to the performances of his pals Jello Biafra and Henry Rollins, but there is an extra dimension to it. At his solo/spoken word show, you can expect to hear stories about D.O.A. as well as Joey’s take on current political events around the world. He also works some of his stories into songs, which he performs solo with his trusty old SG electric guitar.

A lot of his stories spring from riots and protests around the world he has been involved in. The tales also arise from performing shows with the likes of Black Flag, The Dead Kennedys, The Clash, The Ramones, Arlo Guthrie, Pete Seeger, Rancid, Nirvana, Soundgarden, Motorhead, P. I. L., The Circle Jerks, Bad Brains, David Lee Roth and B.T.O. Shithead’s gut instincts and street savvy have always placed him in the forefront of punk actvism. His people power oriented politics have had him and D.O.A. raising money, through concerts and benefit records, for worthy, radical causes over the years. Joey and D.O.A. have spoken out for groups and organizations that work for; anti-globalization, rape relief, rock against radiation, rock against racism, union rights and environmental groups, to name a few. Joey has also run for the Green Party three times in the suburbs of Vancouver, finishing with 15% of the popular vote last time out. Throughout his career, Joey has influenced everyone from Green Day and Sonic Youth to The Offspring and The Red Hot Chili Peppers. In late December 2002, Mayor Larry Campbell of Vancouver, in his 1st official act of office, named December 21st “D.O.A. Day in Vancouver.” Shithead has also worked as an actor and a talk show host on The Joe Show.

But that’s enough for now, sooner or later, you will see professional troublemaker Joey Shithead Keithley in your town. Whether you like it or not.