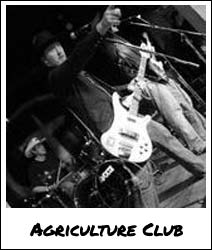 Like most of Alberta’s farmboys and small town youth, Agriculture Club was raised on a healthy dose of country music – and promptly rejected it at adolescence, eagerly devouring as much punk and metal as they could find. Wide-eyed and innocent, they got the hell out of the sticks as fast as they could, moving to the city where all the "cool" people were, and did the usual indie band stuff. Of course, they soon realized there’s just as much bullshit in "the scene" as there was back on the farm – only you can’t haul it away behind a tractor.

So screw it: They put together a band that was at least fun to be in. One that skips much of the subject matter beaten to death by most dirty rock bands, provides a good backdrop for drinking, doesn’t presume to be any smarter than the crowd in front of them and makes loud’n’fast music relevant for non-urban types. So far, so good. Agriculture Club are genuine country-punks with a penchant for story-telling songs and frantic, high-energy live shows. Bashing out distorted riffs just like they did during their angst years, and singing about stuff they truly know about – booze, driving, rural life, and girls etc. -- Agriculture Club is currently bringing the hard side of prairie life to a dirty watering hole in your neighborhood.