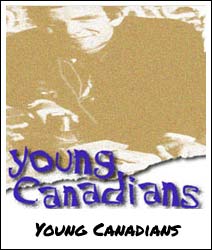 In early 1979, Vancouver had a wonderfully creative, mostly undiscovered punk/new wave scene. The Young Canadians burst on to this scene and were soon heralded as one of the best bans alongside Pointed Sticks, Subhumans and D.O.A.

They were originally known as The K-Tels but after the giant corporation threatened them with a huge lawsuit, they became known as the Young Canadians.

Led by the then unknown but soon to become legendary guitarist/singer Art Bergmann and helped along by the incredibly adept rhythm section of drummer Barry Taylor and bassist Jim Bescott, the Young Canadians soon carved out a strong following up and down the west coast of United States and across Canada with their unique rock/pop/punk sound. From their first EP, the song "Hawaii" with its memorable ling "Let's go fuckin' Hawaii" became an underground hit.

Their second EP, "This Is Your Life" was produced by the legendary Bob Rock and seemed to propel the band a long way. However, the band broke up and Art went on to a wild and crazy solo career. Sadly, they never did do a full album, so Sudden Death Records has released a collection of work they accomplished in their three short years.