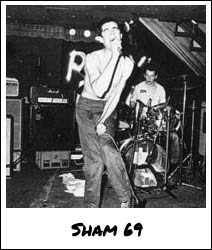 Sham 69 was born in 1976 when Jimmy Pursey got together with Neil Harris(guitar), Johnny Goodfornothing(guitar), Albie Slider(bass) and Billy Bostic(drums). They were nothing more then a cover band, but as the "punk" scene grew so did they. Quickly, more fans tagged along to see them play and Pursey decided some changes were to be made. Dave Parsons was hired to play guitar and Mark Cain was signed on to drum.

Soon, they had a few hits including "George Davis Is Innocent" and "Let's Rob A Bank". The EP "I Dont Wanna" came out in 1977. Albie quit the group shortly after and was replaced by Dave Treganna. In October 1977 the band was asked to play on TV for a documentary. Polydor had caught on to the scene and signed Sham 69. In February they came out with their debut album "Tell Us The Truth" and in April, their new single "Angels with Dirty faces" was released.

However, Sham 69's frontman was getting them into to trouble with a following of violence. Others hits that followed were "The Kids are United" and "Harry Up Harry", which followed many others up the charts. Unfortunately, drinking became an issue, which led to the end of their live career. People still listened to them but Sham 69 was no more. In June the band officially broke up. The breakup brought an end to a fantastic career.