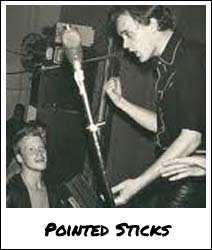 The Pointed Sticks were a west coast phenomenon that burned white hot during their short career from 1978-1981. Coming out of Vancouver, Canada, the Sticks created a unique legacy with their pop/rock/punk sound.

The Perfect Youth album, produced by legendary producer Bob Rock, was their last recording. When it was released in 1980 it sold well across North America and its bright, fresh and fun sound captures this great band at it's peak. Now re-released for the first time in 25 years on Sudden Death Records, the vinyl version includes the original 12 tracks and the inner sleeve. The CD version has four rare bonus tracks.

You won't want to miss this intense and unforgettable album.