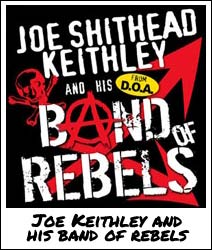 JOE SHITHEAD KEITHLEY, Canada’s infamous anti-hero, has won over a couple of generations of fans and performers through his work in D.O.A., his writing and his activism. He’s influenced artists like GREEN DAY, THE RED HOT CHILLI PEPPERS, NIRVANA, RANCID, NOFX, BAD RELIGION, HENRY ROLLINS, JELLO BIAFRA and IAN MCKAYE.

When asked why he has recorded a solo album when D.O.A. is still going strong, Shithead had this to say; “I got to stretch out and try new things, this is a different way to fight the system. Band of Rebels is like an extension of D.O.A., musically it’s a little different, but it’s still nuts and it’s still meant to cause trouble and stir shit up!” Band of Rebels is out June 19th, so come and join the revolution.