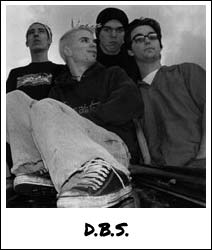 d.b.s. is a Canadian band from Vancouver, British Columbia.They were on the scene for about 5 years and released four full length albums prior to their SDR release, i is for insignificant. Tales From the Crib in (1995), If The Music Is Loud Enough... (1996) and North America Sucks (a split with Pittsburgh band Anti-Flag) were released through the label Nefer Records. In their 5 years they toured with such bands as Rancid, Falling Sickness, Anti-Flag, Digger, Slacker, I-farm, No Fraud, DOA, Gob, Bouncing Souls, AFT, Youth Brigade and many more... Jesse from D.B.S. has gone on to record and play in Operation Makeout.