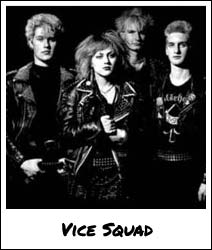 Vice Squad is described as one of the most influential bands in the entire history of punk. Formed in 1979 by Becki Bondage (Rebecca Louise Bond) on vocals, Dave Bateman on guitar, Mark Hambly on bass and Shane Baldwin on drums. After hearing the great sound of bands like The Damned and The Ruts, Vice Squad decided to become a punk band. After having performed only three gigs, Vice Squad managed to sign with Heartbeat Records and record "Avon Calling". Vice Squad's first debut EP was “Last Rockers”, formed in 1981. With “Last Rockers” created in a matter of a few weeks, Vice Squad went from local status to Punk’s First Division. “Resurrection” EP followed in May of the same year. This topped the Indie charts of EMI Records.

EMI was determined to transfer Vice Squad from an Independent success to National Charts, making Top 75 in the UK. They made another debut LP “No Cause For Concern”, which was done in three days and made No. 32 on the charts. “No Cause For Concern” was an album that brought the Punk movement; youthfulness, energy, rebellious melody and streetwise honestly. Six months later, Vice Squad released their second LP, “Stand Strong Stand Proud”, recorded in London. It featured three tracks, “Stand Strong Stand Proud”, “Tomorrows Soldier”, and “Rock 'n' Roll Massacre”. Released in 1982, the LP took No. 47 and spent a total of five weeks in the UK charts.

In April and May of 1999, the band played successful tours throughout Holland, Germany, Austria, Slovenia, Italy, Switzerland, and Spain. They also played the UK punk festival "Holidays in the Sun" alongside UK subs, The Dammed, Anti-Nowhere League, Sham 69, One Way System, and US bands Murphy’s Law, The Dickies, Anti Heroes, and Drop Kick Murphy’s. In July and August of 1999, Vice Squad toured the US as part of the "Social Chaos" tour. Clearly, Vice Squad’s amazing music has made an impact on the punk scene both locally and worldwide.