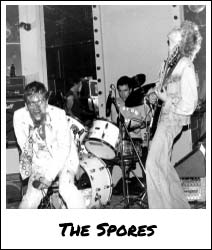 Sudden Death Records is proud to be releasing a new cd from an old school Vancouver punk band, The Spores! The cd is titled "News, Weather and Spores".

Yow! After twenty years in secret vaults, a new anthology of songs has resurfaced from Vancouver’s Punk Rock jesters - The SPORES. As one of the leaders of the second wave of punk’s ‘glory years’, the band clawed their way through the shattered music scene of 1983, recording several singles, videos and the album “Schizofungi!” which was hailed by both geniuses and idiots alike. The songs were furious yet melodic, and the band was compared to the music styles of The Damned and Stiff Little Fingers. Known for their outrageous live act, they grew a fan base of rabid followers who were a constant element to their sold out shows.

In 1988, during the intense recording of their follow-up album, the Spores were torn apart, leaving only fragments of what would be their best songs. As the years passed and other musical styles rose and fell, these songs percolated in hybernation until recently rediscovered. Now, remixed and digitally enhanced, they form the anthology “NEWS WEATHER and SPORES”, along with other selected anthems from the band’s vinyl years. Many of the songs, like “Shopping Binge” and “Conspiracy in the Sky” have themes which are even more relevant today than when they were written. However, the master recordings of two songs were unfortunately never found, and as an added bonus to the CD, some members of the band reunited decades after to rerecord from scratch these tunes, which appear as the last two tracks.

These 20 songs represent the best of the Spore’s output and none have ever been released on CD before. The disc also contains anti-videos for “Up the Boss” and “Meat Biproduct”. Available now on Sudden Death Record.