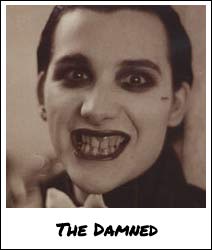 The punk era was epitomized by spiky hairstyles, safety pins through varying parts of the anatomy, disorder, abrasive guitar riffs, a general lack of respect for anything that smacked of establishment and destructive rock 'n' gob performance from the Damned.

The Damned’s first single was on the Chiswick label, following nearly three "successful" years with Stiff Records, but without a hit. The Damned charted with fifteen singles in total and had their greatest success in the "vamp" days of the mid 80's. However "Love Song" marks their place in the punk scene. Group member Captain Sensible went on to "greater" things and the exclusive No.1 hit with "Happy Talk" in the summer of '82. The Damned are one of the most outrageous punk bands of the 80's since the Misfits.