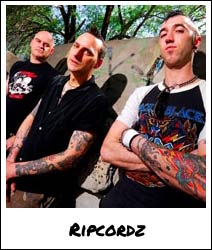 The Ripcordz have been making music since 1980, and had several releases and a host of club appearances to their credit, playing around Quebec in the early 80's.

Then in 1988, the band started applying themselves full-tilt to changing the face of music as we know it. Since then, they've racked up some impressive numbers: ten full-length albums, a CD-ROM, several EPs, eight videos and traveling more than 200,000 kilometers to play more than a thousand shows.

The band has built a large following by combining a lot of influences-from Punk to rockabilly, hardcore to rock 'n roll-to create its own signature sound. They call that sound "Kidnoise" and the centre of it all is Fun.

The band has received raves for its high-energy shows, as well as its ability not to take itself too seriously. They've played with a wide range of bands including The UK Subs, Misfits, Rancid, Youth Brigade, Gob, The Vibrators, Vice Squad, MDC and Nirvana.

Their stated goal is to sell millions of records ("their way"), quit their day jobs, and finally buy a CD player for their tour van that they call 'Pamela Vanderson'. Current plans include a new album just out this summer called What if they held a Revolution and nobody came?, as well as their eleventh cross-Canada tour.